Putting Cows on the Internet of Things 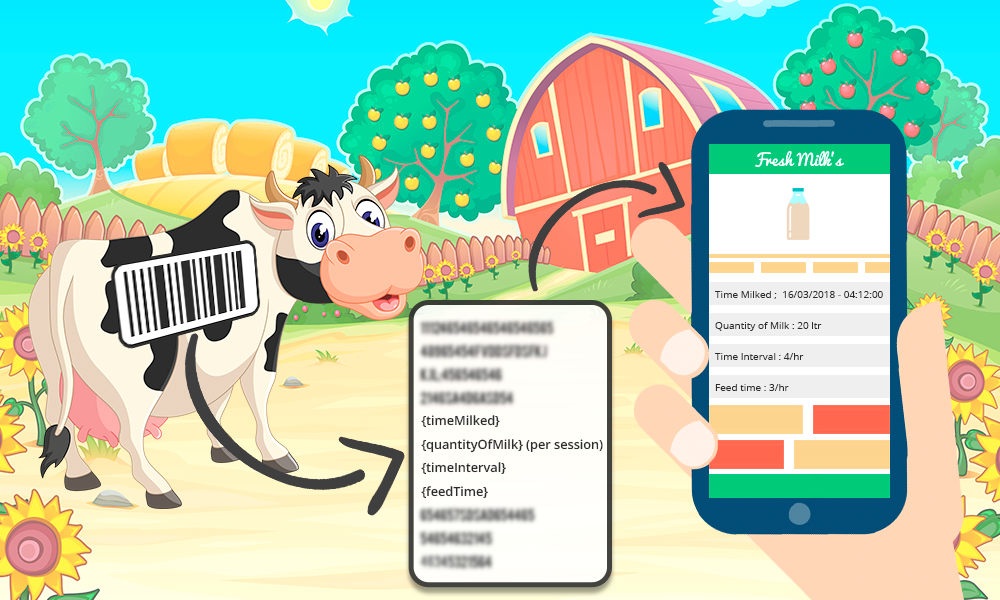 While the world is still getting accustomed to spotting wearable devices on fellow humans, IoT enabled applications have ushered in a new era of the Internet of Products.

The Internet of Things is commonly associated with smart home control devices, wearables like the FitBit, vehicles and other device equipped objects that connect to the internet and exchange data. We rarely ever think of its applications in the context of non-device based things. Like a “Cow” for example.

In a brilliant article by Nic Fildesin the Financial Times titled  Meet the Connected Cow, the author illustrates how farmers are placing sensors on various parts of a cows’ bodies to monitor health and track productivity by connecting them to the Internet of Things.

Traditional farm monitoring has become impasse. Between milking, feeding and maintaining the farm, farmers face challenges with effectively managing their cattle. As a result, professionals are seeking innovative systems that can impact the productivity while simultaneously improving farmer’s life.

Animal sensors precision technology is already making its mark. Who knew something as unexpected as a cow had the potential of playing a role in the Internet of Things. When it comes to connecting things to the internet, one needs to look beyond the obvious devices and electronic objects to unleash the larger potential behind the IoT concept.

Powering the peddle to the “Fitbit” movement, why should animals be left far behind?

Biosensors have found their footing in the emerging animal health management sector. Improving farm life and yield with the help of precise sensors is gaining popularity.

As it stands, farmers are prone to many factors affecting productivity outside their control. Adding the uncertainty of Estrus to the list doesn’t make things any easier.

Estrus is simply the period when animals go into heat. As far as all farm animals, they experience it for a very short period of time. Estrus lasts for 12-18 hours every 21 days.

Biosensors allow farmers to optimize yield in this short period through a predictive approach. These gadgets or biometers are also designed to survive even the toughest environments in the farm while constantly measuring data. This data is being analyzed on the cloud in terms of the number of steps the cows takes during the day.

Microsoft’s Joseph Sirosh delivers a surprising conversation about a farmer’s dilemma, a professor’s ingenuity and how cloud, data, and devices came together to fundamentally re-imagine an age-old way of doing business.

According to Joseph Sirosh, CVP of Machine Learning for Microsoft, Biosensors can:

Let’s unfold the simple secret of detecting Estrus by Japan’s Fujitsu. It consists of technology involving pedometers which go on the feet of every cow and are connected to a receiver in the farm through radio signals, which can receive and transmit alerts.

Fujitsu equipped the herd with battery powered pedometers to detect the number of steps, wirelessly transmitted that information to an MS Azure DB where it was analyzed and notified the farmer via mobile phone app when the time was right.

As shown in the image below, this was strictly to identify the optimum period of Estrus for artificial insemination. 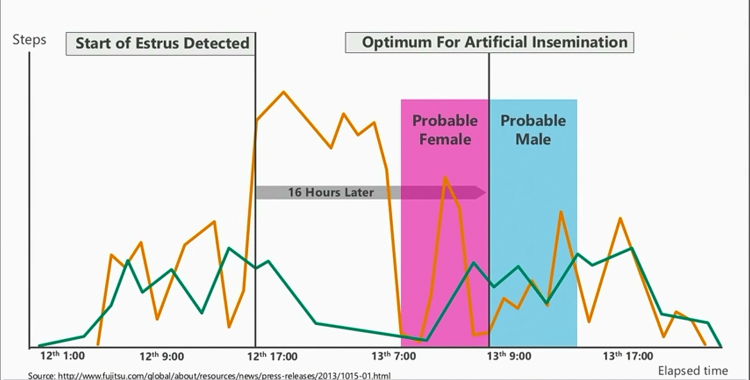 Connected Cows and the Internet of Things

Using and applying technology to detect the patterns of Estrus detection, conception and pregnancy rate can tremendously improve the farm produce quality and also, the standard of living for animals.

These sensors effectively serve as a heat map for farmers. Companies are venturing into a variety of wearable technologies that go in various parts of the cow including but not limited to tails, legs, neck, rumen and more.

The potential that lies in the IoT enables applications or IoP (Internet of Products) or pseudo connected internet of things activated through devices like smartphones is remarkable!

Sensors and wearable devices implanted in animals can measure body temperatures, pH levels, observe and analyze behaviour, movements, patterns, detect illness and viruses pushing the data online to be analysed. However, there are applications that can be built without the use of sensors and devices that connect directly too which can become increasingly accessible. Imagine having an online record of each cow with attributes like:

With a smartphone, the farmer can scan barcoded cow while milk is being collected and log that data against the digital record for the cow on the internet. This would not just create an individual log for every cow but also help analyse patterns and optimize productivity.

In terms of putting “things” on the internet, we’re starting to see new and innovative applications every day and the cow on the internet is a perfect metaphor for the potential that lies ahead.